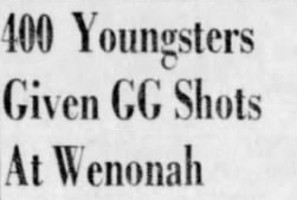 Click on the link at bottom to read an article about the mass inoculation that appeared on July 26, 1954 in the Camden Courier Post. Or read the text below. GG is short for gamma globulin.

400 Youngsters Given GG Shots At Wenonah

Wenonah, July 26
Like little soldiers, more than 400 girls and boys marched through a medical center here Sunday to receive immunization shots in this borough's war against an outbreak of polio.
The State Department of Health sent representatives, who stood by as a large corps of doctors, nurses and other volunteers administered m the inoculation of gamma globulin.
The action was taken by the Wenonah board of health after an outbreak last week of three cases of polio in the community within four days. It marked the first time for the mass use of GG in the Gloucester County area, Five Hours of Work
Known as "Operation Lollypop," the five hour inoculation battle was described as a success by Mrs.
Betty Clow. of Westville, chairman of the Gloucester County Chapter, National Foundation for Infantile Paralysis, who led a team S of workers from the organization.
As the boys and girls lined up for shots at the Medical Center of Dr. Donald Weems, at 107 E. Mantua aves they helped the doctors perform the task in mass efficiency. Two rooms of the center were used for inoculations and the children marched through, one at a time, in rapid succession, Some Doubtful Like real soldiers, some actually were brave, others doubtful. Also like some real soldiers who have been known to eye inoculation needles with mounting apprehension-others were noisy.
After receiving inoculations, the children could be seen reaching with one hand for their lollypop reward, as they soothed the point of contact made by the gamma globulin needle.
When the third case of polio was reported here last week the local playground and Warner's Lake, Wenonah, were ordered closed Friday for a two-week period as a preventive measure against a spread of the disease.
Mrs. Clow said 405 inoculations were made, including children whose ages ranged from 1 to 10,
or up to the fifth grade in school, and also several expectant mothers. - Result Is 'Very Good
Describing the result as "very good," Mrs. Clow expressed the e opinion the mass inoculation brought out practically all of the
children in the desired age bracket.
She pointed out the total Wenonah e School enrollment, including children up to the eighth grade, is 277. Dr. Hugh D. Palmer, of Haddonfield, state 'health officer for South Jersey, who witnessed the mass inoculation with representatives of the State Department of Health, explained the use of GG for the smaller children and expectant mothers is designed to halt any
spread, but the protection given by 11. GG lasts only from five to, at the most, eight weeks. Meanwhile, all home contacts
under the age of 18 in the three homes where polio has occurred them and all others exposed to the disease, Mrs. Clow said, Drug Released by State
The gamma globulin was re teased by the state at the request of the Wenonah board of health, Mrs. Clow said, and local doctors
olunteered services for the free immunization.
With Dr. Palmer were Dr. Carl Wiegele, of the state health department, and Miss Grace Unzicker, district supervisor, Public Health Nurses, and Wallace Edgerton, state representative of the National Foundation for Infantile Paralysis,
A form requesting the GG immunization was signed by parents of children innoculated, Mrs. Clow said.
On behalf of the Gloucester County Chapter. National Foundation for Infantile Paralysis, Mrs. Clow expressed her appreciation to the doctors and other volunteers.
They included Dr. J. Eart Wentzell, Dr. Donald B. Weems, Dr. Ronald P. Stratton, Dr. Reveille D. Zapf and Dr. William Morris. Nurses, Mrs. Harvey Cale, Mrs. Allen Dilks, Mrs. J. E. Wentzell, Mrs. Donald Weems Mrs. R. L. Hillyer and Mia Sara Dougherty.
Clerks, Mrs. John Cowles, Mrs. George Bowker Jr., Mrs. R. P. Stratton, Mrs. Valentine Roth, Mrs. Barry Schwartz, Mrs. Jenkins, Mrs. Clifford Haggas, Mrs. George Baldwin, Mrs. J. J. Nichols and Mrs. Poole.
Other workers, George Baldwin, William Atkinson, Donald Weems Jr., Mrs. R. Paul Sweeny, Mrs. Fred Davis and Mrs. Cora Colson; James Ross, local storekeeper, who provided refreshments for the volunteers in the basement the medical center and the Letty Lane Candy Factory, Westville, which contributed the lollypops.
The Wenonah Lions Club donated use of a sound truck equipped with a public address system. The town was divided into sections and the club advised residents when children of each locality were to report to the center,
Local churches announced the immunization at morning services.
Directing the flow of traffic at the medical center were Police Chief George Bowker Sr. and Officers Walter Hain, Jerry Hammond and Thomas Schear.