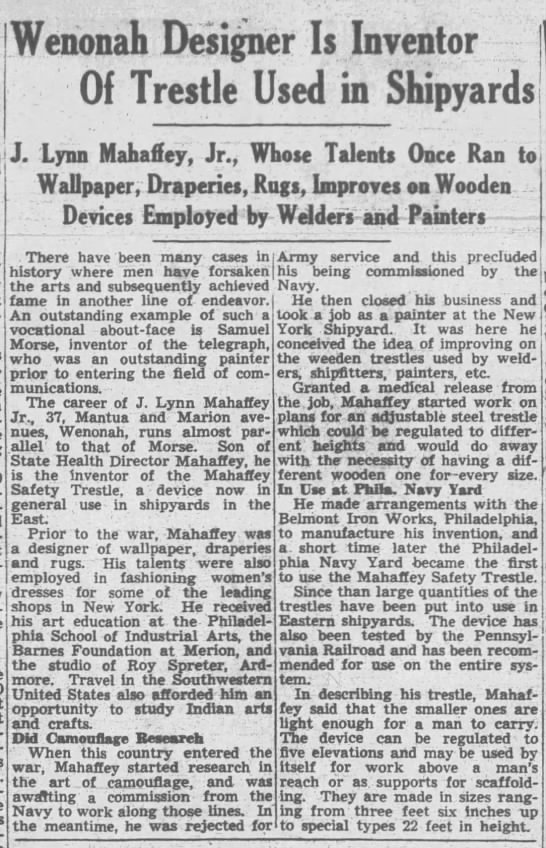 Wenonah Designer Is Inventor Of Trestle Used in Shipyards J. Lynn Mahaffey, Jr., Whose Talents Once Ran to Wallpaper, Draperies, Rugs, Improves on Wooden v Devices Employed by Welders and Painters - There have been many cases iniArmy service and this precluded history where men have forsaken his being commissioned by the the arts and subsequently achieved wavy. lame in another line of endeavor. An outstanding example of such a vocational about-face is Samuel Morse, inventor of the telegraph. who was an outstanding painter prior to entering the field of communications. The career of J. Lynn Mahaffey Jr., 37, Mantua and Marion avenues, Wenonah, runs almost parallel to that of Morse. Son of State Health Director Mahaffey, he is the inventor of the Mahaffey Safety Trestle, a device now in general use in shipyards in the East- Prior to the war. Mahaffey was a designer of wallpaper, draperies and rugs. His talents were also employed in fashioning women's dresses for some of the leading shops in New York. He received his art education at the- Philadel phia School of Industrial Arts, the Barnes Foundation at Merion, and the studio of Roy Spreter, Ard-more. Travel in the Southwestern United States also afforded him an opportunity to study Indian arts ana crafts. v , Did Cameuflas-e Research ' When this country entered the war, Mahaffey started research in the art of camouflage, and was awsSting a commission from the Navy to work along those lines. In" the meantime, he was rejected for He'then closed his business and took a job as a painter at the New York Shipyard. It was here he conceived the idea of improving on the weeden trestles used by welders, shipfitters, painters, etc. Granted a medical release from the. Job. Mahaffey started work on plans for an adjustable steel trestle which could be regulated to different heights and would do away with the necessity of having a dif ferent wooden one for-every size. In Cse at PbHa. Navy Yard He made arrangements with the Belmont Iron Works. Philadelphia. to manufacture his invention, and a. short time later the Philadelphia Navy Yard became the first to use the Mahaffey Safety Trestle. Since than large quantities of the trestles have been put into use in Eiwtjn-n hinvrri Th. rWir hs also, been tested by the vania Railroad and has been recommended for use on the entire system. . In describing his trestle, Mahaffey said that the smaller ones are light enough for a man to carry. The device can be regulated to five elevations and may be used by Itself for work above a man's reach or as. supports for scaffolding. They are made in sizes ranging from three feet six inches -up to special types 22 feet in height.