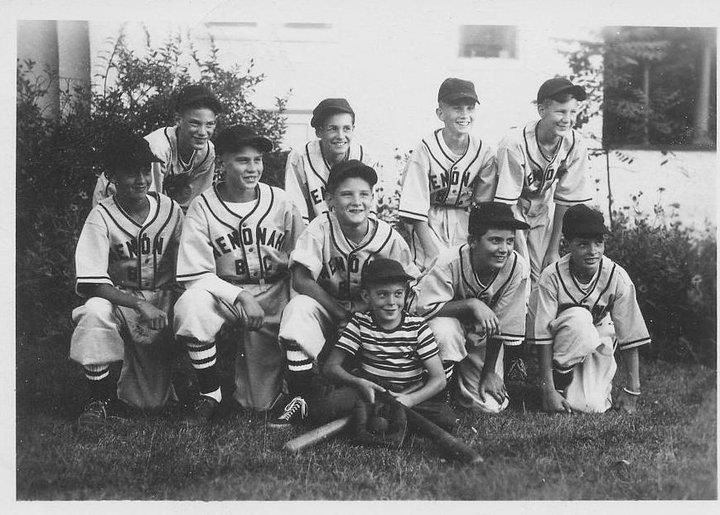 he team was formed during WWII by Bill Queale and my dad George Gehring. We originally played teams from Gibbstown, Mantua, Sewell and Jericho. There were no Leagues. Thru bake sales and collecting newspapers, etc. we finally raised raised enough money for uniforms which my father purchased for Mitchell & Ness in Phila. Most of us were ~14-15 years old then.

The boys names 1st row Dick Olson, Jack Kaufman, Billy Queale, Don Hopkins, George Gill. Back row Tom Byers, Don Gehring, Chuck Peters, Frank Magin Jr.. Mascot "Butch" Phil Baum.Most of our games were played on Saturdays. A few other kids that played were John and Merle Richman, Jack Kaufman's cousin Dale Sklenar(Donora, PA) and Gordie Scargle. Dick Olson was an Army brat whose grandparents (the Bell's) lived at 105 N. Jefferson & adopted Wenonah as his home. The following year we bought bases, pitchers rubber, catchers equipment from the same store from Ben Kish an Eagle player salesman. As kids, weekly we had to groom the ball field with push mowers, shovels & rakes, sickles. At home games a parent would pass the hat around to buy a new ball for our next game. One volunteer umpire behind the pitcher, no confection stand, outhouse behind a tree or car in right field. Big league measurements! 90' bases. Lime and paid umps & and more teams/leagues were beginning in the early 50's. Not sure when girls softball started. Jake Davidson started Wenonah soccer in ~1973. Son Mike was an original. Remember it's Langston Field at the corner of Clinton & Cedar. Read the plaque.